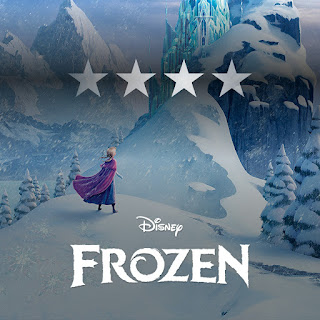 As part of an exchange agreement, in which I've persuaded the girlfriend to watch Gravity (although, frankly, she shouldn't need persuasion), I was made to watch Frozen, Disney's 53rd animated classic.

To be honest, I don't mind. I set myself another challenge recently, which was to legally acquire every single Disney animated classic for less than £5 ($8.40) each. I don't know about other regions, but in the UK, Disney films are some of the most expensive around.

As a result, I've been catching up on some of the little known classics such as Saludos Amigos or The Three Caballeros. However, after managing to avoid Frozen at the cinema, I was cornered at the weekend after the girlfriend bought the DVD (yes, for more than £5!).

Unlike Disney's Mexican tales above, Frozen is neither an obscure or a little-known tale, loosely based as it is upon Hans Christian Anderson's 1844 fairy tale The Snow Queen (Danish: Snedronningen). Like most Disney stories it has been excessively dumbed down for the younger audience and, unsurprisingly, features a number of musical numbers.

In the original plot, the Snow Queen is only really a minor character mostly just referred to by the protagonists. It is a young boy called Kai who is taken by the Snow Queen and is under an enchantment to forget about his best friend, Gerda.

In Frozen, the characters of the Snow Queen and Kai have been combined in Princess Elsa (Idina Menzel) who suffers from an inherited curse which causes her to freeze things during certain emotional times. Gerda has been replaced by Elsa's younger sister Anna (Kristen Bell) who teams up with a split out of the original reindeer character, Bae, into ice cutter Kristoff (Jonathon Groff) and his reindeer Sven.

Although Disney has become renowned for its princesses, I would go so far as to say that Frozen is their most refreshingly feminine film to date. Hans Christian Anderson's tale split the male/female roles equally, so for Disney to use male characters solely for comic relief (or, as the film's main antagonists), it shows that they are understanding their key audience of children and ladies over the generally begrudging fathers who were dragged to the cinema with their families.

This approach is in direct contrast with their attempts to ambush gamers and, primarily, men with 2012's film, and the 52nd animated classic, Wreck-It Ralph. That's not to say that men won't enjoy Frozen; there is plenty of comic relief in the form of snowman Olaf (Josh Gad) and a periphery of minor characters who help in splitting the story up and this will only aid the male appeal.

However, it wasn't the feminism that was getting all of the plaudits. Disney is back to its best with the music, and won the Academy Award for Best Original Song for Let It Go. In truth, I can't remember any of the songs in Wreck-It Ralph or Tangled, but have been silently humming Do You Want To Build A Snowman while writing this review... in May. Unfortunately, one if the other songs I keep humming is We Are Cutting Ice, from the Honest Trailers parody.

Regardless, a parody only enhances the reputation of a film and, I'll say this quietly in case the girlfriend is listening and expects me to watch animated classic 54 (Big Hero 6)... I rather enjoyed it.