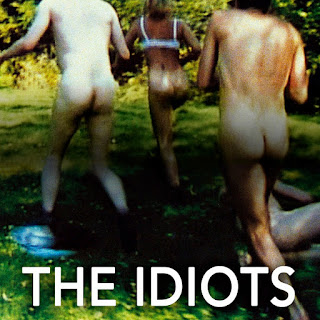 Interestingly enough, I've had this review partially written since before my last hiatus. I never really had a huge desire to post it because I wasn't really sure what to say about The Idiots other than that it is a very bizarre film. Regardless, here are my thoughts.

In my life away from film, I've moved into my house and am starting the home cinema transformation [edit: now basically complete]. Now that I've converted my entire collection to a digital library, I'm able to watch films on the move. So, during my bi-weekly trips to watch football I take along my tablet on the train.

One such film I watched on the way back from London was The Idiots. Let me begin by saying that you do not want to watch The Idiots in a public place (you may not want to at all, but we'll get to that later). It is about a group of perfectly normal people pretending to be mentally retarded in order to see how society reacts to their behaviour.

Firstly, there's Stoffer - the leader. He is clearly the most active and the most daring of the group, but also appears to be the one with the least to lose. The rest of his colleagues have loved ones they care about, but are happy to abandon them in order to live by the excitement that Stoffer brings them. Finally, there is the newest recruit, Karen, who wants to be integrated to not only satisfy her curiosity but to fulfil an unknown void in her otherwise meaningless life.

Because of the film's topic, it makes it very difficult to review in any sense other than its moral or ethical outlook. Sure, the acting is perfectly fine but in the scheme of things the acting is completely irrelevant. This is a film you will either enjoy because of its social commentary on the relationship between cult movements, their leaders and their followers, or hate because of its avant-garde content.

Film critic Mark Kermode was notoriously thrown out of Cannes in 2002 after shouting "Il est merde [it is shit]" during the screening of The Idiots. He later claimed he was just sick of Cannes as it was an "exercise in ritual humiliation" where reviewers gather to tell their readers there is a cultural party going on that no-one else has been invited to. I fully understand.

I defy anyone to tell me that they enjoyed The Idiots and, for this reason alone, I refuse to award a single star. I can understand people appreciating it, but only in an artistic sense. But like it? I don't think so.
0 stars
List - Empire 500 5-star (2011)