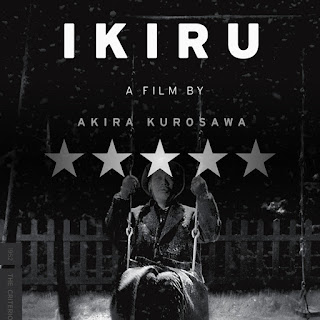 Following my last review (In The Mood For Love), I figured I might as well keep the theme of the East Asia going with my thoughts on Ikiru.

Ikiru, as is nicely pointed out in the subtitles, is the word for "Living" in Japanese and is one of the most apt and intelligent titles on the 5-star list. Mr. Watanabe is a council worker who lives up to every modern perception of public office possible. He spends his life aimlessly pushing papers across the desk while the council itself sends the community around the merry-go-round of its departments in a clear lack of efficiency.

His relationship with his family is strained as his son tries to escape the monotony with his wife, but it is not until Mr. Watanabe is diagnosed with stomach cancer that he decides to do something about it. It is at this point that the film takes a sudden turn towards 12 Angry Men as his funeral-goers argue whether Mr. Watanabe was as proficient as rumours suggested.

Despite the film being clearly split into two acts, it never loses focus of the moral picture it attempts to paint. At some point in our lives we seek direction or a kick that jolts us from an otherwise dull existence. It notes that we are all saving money for a rainy day, but what if that never comes? It is clear that Mr. Watanabe's son is far more vigorous in his youth and sees the opportunity to spend his father's money in ways that his father never could.

Obviously, as you can probably tell, Ikiru has a rather morbid undertone and occasionally veers towards depressing. But, rather than making you feel desperately sorry for Mr. Watanabe, its poignancy makes you want to kick him into action with an element of hypocrisy, before reflecting on the comparisons with your own existence.