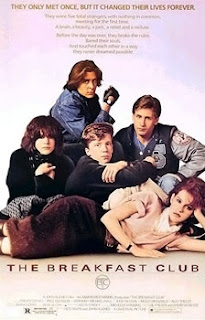 Five teenagers who spend time in detention realise they have more in common than meets the eye.

When Brian 'the Brain' Johnson (Anthony Michael Hall), Andrew 'the Athlete' Clark (Emilio Estevez), Allison 'the Basket Case' Reynolds (Ally Sheedy), Claire 'the Princess' Standish (Molly Ringwald) and John 'the Criminal' Bender (Judd Nelson) are all brought in for a Saturday detention at school, they are told they must write a 1,000 word essay about who they think they are.

They initially despise the differences between themselves, but as the day moves on they realise they have more in common than they initially thought.

Considering it has a cast of almost entirely students, this isn't necessarily considered to be a teen movie. There is no sex, very little drugs and only one amusing scene with rock and roll - involving air guitars.

Instead, it is a character study of the clichés in schools around the world (especially the States) that both adults and teens can relate to - if only to remember which cliché they would be classed as. Not only this, but even for those who can no longer relate to their younger self, there is always Mr. Vernon - the students' teacher.

The film remains accessible because of its 'stay young' message, and I dare anyone that watches it to resist the urge to whip out their year book to bring back their own personal memories. Perhaps even you have a little note from the janitor - the one man who is able to stay in touch with the youth in schools.

Laugh along funny, and happily avoids slipping into corny.