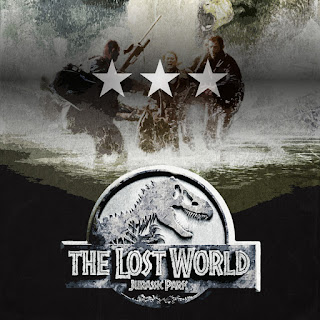 "This time there's more. This time it's war.", muses the tagline of Aliens, the 1986 follow-up to the hugely successful Alien. It was the first glimpse of a sequel wanting to step out of the original's shadow, to dare to do something different, and to prove that its franchise lends itself both to the suspense thriller genre of the original, and its new all action approach.
As if echoing this, Michael Crichton, the author of Jurassic Park, eventually caved into fan desire for a sequel to both his novel and the 1993 Steven Spielberg movie adaptation. As if echoing Aliens, he said "it’s a very difficult structural problem because it has to be the same but different; if it’s really the same, then it’s the same—and if it’s really different, then it’s not a sequel."
In A Lost World: Jurassic Park we are taken back to a second island previously used by InGen where dinosaurs now roamed free. Ian Malcolm (Jeff Goldblum) agrees to go when asked by InGen's former head-turned-naturalist John Hammond (Richard Attenborough), after finding his palaeontologist girlfriend Sarah (Julianne Moore) is already there exploring. Meanwhile, InGen's new board have sent a second larger team to sedate and capture the dinosaurs for a new attraction in San Diego.
Harking back to Aliens' tagline, there is certainly more to A Lost World. Visually, it continues Jurassic Park's ground-breaking work, moving away from the amazement of the dinosaurs-are-actually-real diplodocus moment of Jurassic Park and sticking characters straight in the thick of the action.
For a film heavy on action, it still harks back to the suspense of the original, with the much-copied cornfield raptor chase providing an exceptional highlight. However, despite this, the story often feels very forced and often bordering on farcical.
Ian Malcolm aside, the scale and potential terror of the dinosaurs appear lost of all of the characters who are all willing to risk their lives for some petty personal gain, whether that is another hunting trophy or scientific breakthrough.
Even Spielberg seems to get caught up in the scale, having perhaps watched a lot of Godzilla before filming and lifting scenes from the Japanese monster flick.
But for all its flaws, The Lost World dares to be big. It dares to try something different. There is more, there is war, and it's still entertaining.
3 stars

If you liked that review, try these similar ones: Franchise - Jurassic Park